The global carbon cycle involves complex processes and interactions within the Earth system, and understanding these is crucial for climate change mitigation and adaptation. This classroom explains the most important aspects of the carbon cycle and how it is affected by changes in CO2 concentrations.

Carbon is an important element for life on Earth. It is found in all components of the Earth system: the atmosphere, land, lithosphere and oceans, which serve as carbon reservoirs. The processes through which carbon is exchanged between these reservoirs make-up the global carbon cycle.

In the atmosphere, the main form of carbon is as carbon dioxide (CO2), with small amounts present as methane (CH4) or other compounds. In the land, carbon is found in the soil, plants, animals, water bodies and microorganisms. The largest amount of carbon in stored in the lithosphere, which includes sedimentary rocks and the Earth’s crust, for example in the form of fossil fuels. Finally, the ocean also contains a large amount of carbon, mainly stored in the ocean sediment, with a small amount found at the surface. 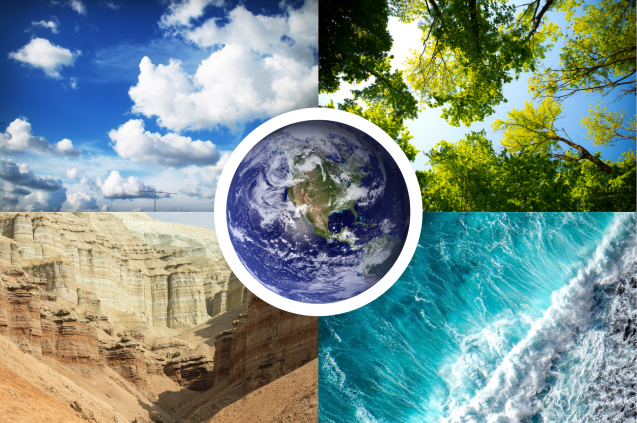 In the carbon cycle, there are a number of carbon sources and sinks. Sources release carbon into other reservoirs of the Earth system, and can be either natural (e.g. plant decomposition and volcanic activity) or caused by human activities (e.g. fossil fuel combustion). Sinks absorb carbon from other reservoirs; for example, the ocean absorbs and stores carbon from the atmosphere.

Some reservoirs may function as both sources and sinks; for example, forests act as sinks by absorbing carbon dioxide (CO2) from the atmosphere as part of photosynthesis, and act as sources by releasing carbon in different forms back from soil into the atmosphere through processes like respiration and decomposition.

The carbon cycle consists of fast and slow domains, according to the time it takes for the exchange of carbon between reservoirs, ranging from days to millions of years.

The fast carbon cycle mainly involves the move of carbon between the atmosphere, ocean and land. Its main components are plants and phytoplankton. For example, carbon associated with harvest and growth of forests is a part of the fast domain.

By contrast, the slow carbon cycle is the flow of carbon stored in rocks and the Earth’s crust (lithosphere) to the atmosphere, soil and ocean through processes that can take millions of years. Such processes include erosion, which moves carbon from rocks to rivers and the ocean, and volcanic eruptions that release carbon into the atmosphere. 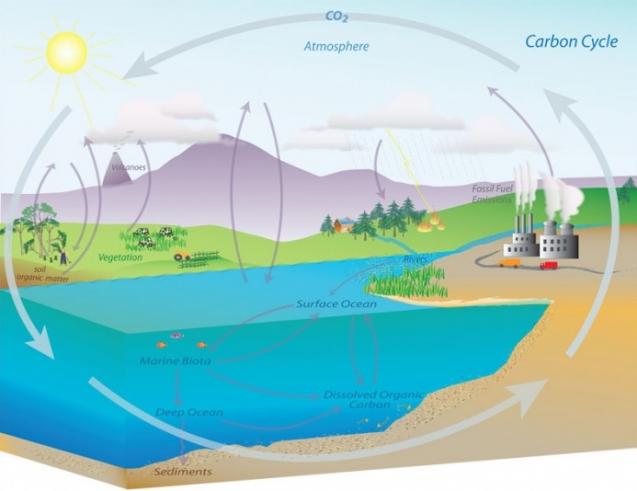 Changes in the global carbon cycle

The carbon cycle maintains a stable concentration of carbon in the Earth system, with some natural variations (see “4C Climate Classroom: The main drivers of changes in CO₂ concentration in the atmosphere” for more information). However, when the amount of carbon in one reservoir changes, e.g. due to human activities, this can cause an imbalance in the Earth system and result in changes in other reservoirs.

Human activities, such as fossil fuel burning, land use changes (e.g. deforestation) and the production of cement, are releasing large amounts of CO2 in the atmosphere since the Industrial Era, which began around 1750. This disrupts the balance in the exchange of carbon between reservoirs and affects the carbon cycle, particularly by taking carbon from the slow domain into the fast domain.

The CO2 released into the atmosphere by human activities is partly taken up by the ocean or land (considered as carbon sinks). In the ocean, CO2 is taken up by the surface water, and transported to deeper layers and the sediment. However, this can increase the ocean’s acidity (known as ocean acidification), and have detrimental effects on the growth of corals and other organisms. On land, increased atmospheric CO2 leads to increased photosynthesis and plant growth. Nevertheless, as the land and ocean sinks respond to climate change, their effectiveness to take up the excess CO2 from the atmosphere may be limited.

Despite this uptake by carbon sinks, the CO2 concentration in the atmosphere is gradually increasing, as the sinks only remove about half of the CO2 emitted by human activities. This atmospheric CO2 increase is the main cause of climate change and the observed global temperature increase. Since 1750, atmospheric CO2 concentration increased by about 50%, from about 280 parts per million (ppm) to more than 410 ppm today.

Although the main interactions of CO2 and the climate are widely known, some gaps remain in our knowledge. Certain aspects of the carbon cycle are relatively well understood, such as the carbon uptake through photosynthesis, carbon release through decomposition, and carbonate dissolution in the ocean.

Nevertheless, other processes remain poorly understood despite their importance in the carbon cycle. In particular, processes that are intensified by climate change, such as the thawing of permafrost (i.e. areas of land that are permanently frozen), increased risk of wildfires and drying of wetlands, can release large amounts of CO2 that was stored for a long time. Such processes can also trigger feedbacks in the climate system, amplifying (positive feedback) or diminishing (negative feedback) the original response, as well as additional ecological impacts.

One of the key objectives of 4C, an H2020-funded project, is to explore the climate-carbon interactions and better understand the global carbon cycle. This will contribute to the accuracy of scientific reports, such as the IPCC reports and the Global Carbon Budget. More importantly, better understanding of the carbon cycle will inform decision makers and policy (such as the Global Stocktake), and encourage governments to take the necessary action for climate change mitigation and adaptation.

This 4C Climate Classroom is also available as a PDF.