Climate classroom: The main drivers of changes in CO2 concentration in the atmosphere 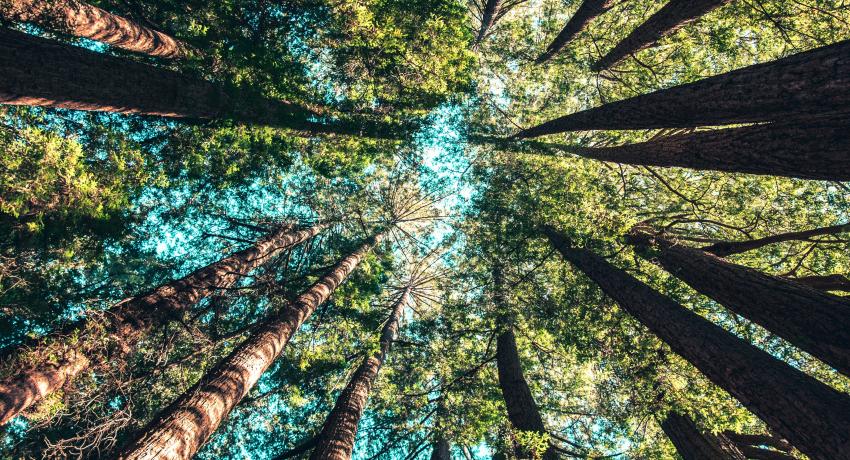 Short-term variations in atmospheric CO2 levels are caused by natural processes or human activities. This classroom discusses these drivers to better understand what affects changes in CO2 levels and why this is relevant for the political agenda.

The carbon dioxide (CO2) concentration in the atmosphere is affected by both natural processes and anthropogenic emissions. Distinguishing the short-term variations in CO2 levels due to natural processes from human emissions is important for calculating the carbon budget and pushing for action to mitigate the effects of climate change.

Here, we explore the four main drivers of the changes in the level of CO2 in the atmosphere in the order of their contributions to weekly and monthly variations (from greatest to smallest).

Throughout the year, seasonal fluctuations are seen in CO2 levels. The concentration decreases in spring and summer, and increases in autumn and winter. Forests are mainly responsible for these fluctuations, since they absorb CO2 through photosynthesis in spring and summer, and then release part of it back into the atmosphere during the decay of their leaves in autumn and winter. This cycle can be seen as the planet 'breathing'. The seasonal cycle of CO2 is more prominent in the Northern Hemisphere, where land and forest coverage is about twice as big as that in the Southern Hemisphere.

The second most important driver of short-term changes in CO2 levels are human activities, such as the burning of fossil fuels, deforestation and land use changes. These activities transfer carbon that has been stored underground for a very long time into the atmosphere in the form of CO2. Nature partially compensates for this increased level of CO2, with forests and oceans absorbing about half of the emitted CO2, but not without consequences, such as ocean acidification. Nevertheless, 44% of the CO2 emitted by anthropogenic sources remains in the atmosphere each year. When considering short-term seasonal variations in CO2 levels, the seasonal cycle is the strongest contributor, since the effect of human emissions does not vary significantly throughout the year. 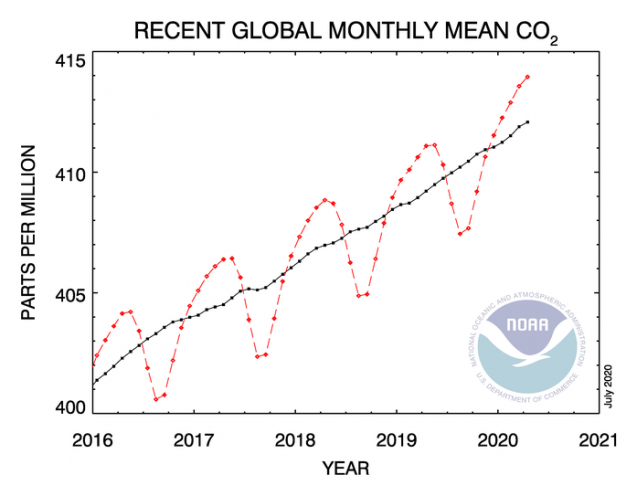 The third driver of CO2 concentration changes is the El Niño-Southern Oscillation (ENSO), often referred to as simply El Niño. ENSO is the naturally occurring cycle of pressure and temperature differences over the tropical Pacific Ocean. In El Niño years, more droughts tend to happen in important forested areas, which reduces the productivity of forests, in turn reducing the amount of CO2 they absorb from the atmosphere. These drier conditions can also lead to increased wildfires, releasing even more CO2 into the atmosphere. Strong El Niño conditions were recently seen in 1983, 1988, 1998, and 2015.

The fourth major driver of changes in CO2 levels is the periodic eruption of volcanoes. Volcanic eruptions release CO2 and other greenhouse gases (GHGs), and large amounts of volcanic dust, which can drive short-term changes in global temperatures. In recent decades, the most significant eruption was that of Mount Pinatubo in the Philippines in June 1991. Nevertheless, the amount of CO2 and other GHGs emitted by volcanoes is very small compared to those emitted by human activities. As a comparison, the eruption of Pinatubo emitted about 50 MtCO2 in 1991, whereas emissions from anthropogenic sources were about 29,000 MtCO2 in the same year.

What do these variations mean for policy- and decision-making?

The amount of CO2 in the atmosphere has been continuously increasing since the industrial revolution due to human activities. A 40% increase in CO2 concentration compared to the 1800 levels (pre-industrial) of 280±10 parts per million (ppm) has been recorded to date. In June 2020, measurements at Mauna Loa Observatory in Hawaii showed a concentration of 416.39 ppm.

Small changes in the amount of CO2 in the atmosphere can have a substantial effect on the temperature at the surface of the Earth. The concentration increase in the past centuries has directly led to a rise in global temperatures.

For instance, in a year where natural variations lead to a decrease in CO2 levels, if these processes are not taken into account, then governments might incorrectly assume that their policies have worked well in reducing CO2 emissions and take no further action. Similarly, in a year where CO2 levels are higher due to natural processes, the incorrect assumption that human activities do not sufficiently affect the CO2 concentration could be made, discouraging any further action.

Improving the quantitative understanding of the carbon cycle will allow scientists to deliver more accurate estimates of allowable future emissions. This can help in creating appropriate policies to mitigate the effects of climate change and in correctly evaluating how these policies affect CO2 emissions.

Parts of the article have been adapted from the "Drivers of atmospheric CO2" page by Robbie Andrew.