Importance of the coastal ocean carbon for climate mitigation and policy 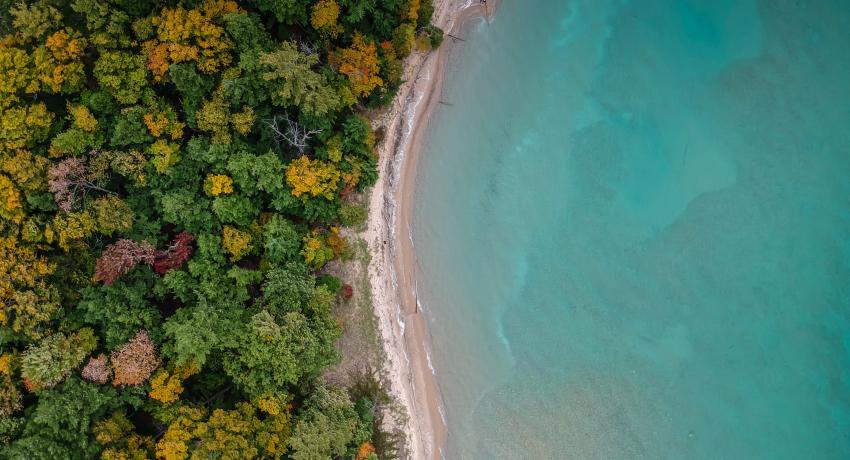 The ocean is an important carbon sink, taking up CO2 that is released into the atmosphere by anthropogenic activities, such as fossil fuel burning and lang use changes. It is estimated that the ocean takes up about 37% of fossil fuel CO2 emissions.

Besides the crucial role of the natural ocean sink in the uptake of anthropogenic CO2, ocean-based CO2 removal techniques could contribute to climate change mitigation and help meet the Paris Agreement goals of limiting global warming well below 2°C. As the coastal ocean is an important component of the global carbon cycle, it is vital to understand the complex processes that take place at the land-ocean interface and how these systems respond to future changes, such as reaching net-zero emissions or employing CO2 removal techniques.

The coastal ocean, referring to the arbitrary margin between the open ocean and continents, is an important ecosystem part of the land-ocean interface. Given its role in the absorption of anthropogenic CO2, including the coastal ocean as a component of the global carbon cycle is critical when developing carbon and climate policies. 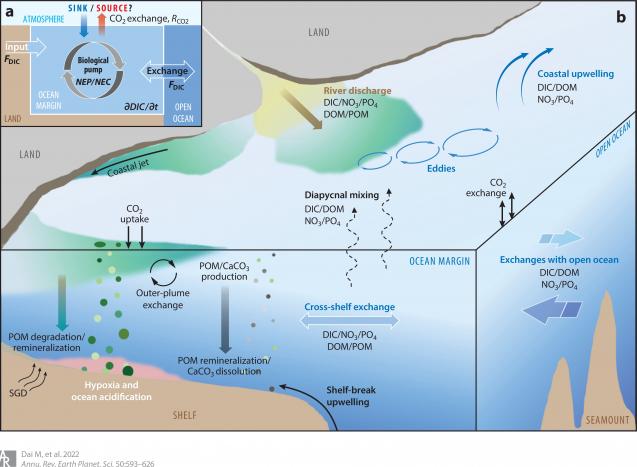 Schematic of (a) air-sea CO2 exchanges and (b) major physical and biogeochemical processes in the coastal ocean. Source: Dai et al (2022)

However, coastal ocean processes are complex, and can vary seasonally, temporally and spatially, which makes its inclusion in Earth system models, and consequently climate policies, challenging.

A new study partly funded by the 4C project attempts to shed a light on the current understanding of the coastal ocean carbon cycle, with a focus on the air-sea CO2 exchange, at regional and global scales. Based on a data synthesis of CO2 flux estimates from 214 sites, the study estimates that the coastal ocean globally takes up 0.25 Pg carbon per year. Notably, the greatest removal of atmospheric CO2 (>90%) was found in polar and subpolar regions.

The study analyses a large variety of methodologies (e.g. observation-based studies, numerical modelling) and provides a critical review of the current status of coastal ocean carbon research, identifying any major gaps and challenges that remain.

By developing a framework that includes both the river-dominated ocean margin and ocean-dominated margin systems, the researchers were able to conceptualise the exchanges, boundary transport and biogeochemical reactions that form part of the coastal ocean carbon cycle. 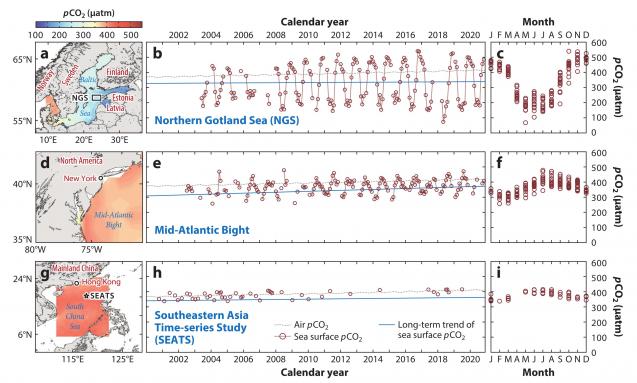 Long-term changes in ocean carbon fluxes since pre-industrial times were detected, which can only be distinguished from the natural fluctuations of the marine CO2 system in some regions. These changes are expected to continue until, and even after, net-zero emissions are reached, although large uncertainties remain.