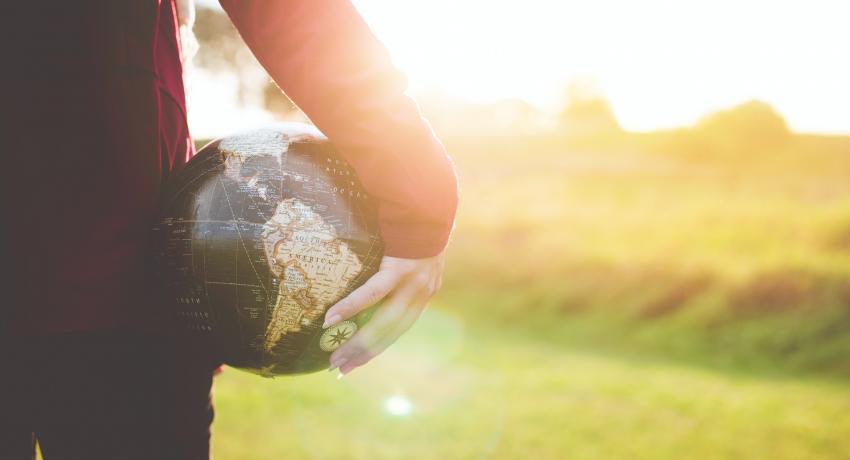 The latest socioeconomic scenarios used in climate change research examine how global society, demographics and economics could change over the 21st century.

The evolution of climate change depends on the development of our society, demographics and economics over the next decades. Limiting global warming to below 2°C compared to pre-industrial levels, or preferably to 1.5°C as it is established in the Paris Agreement, would only be possible if we stop emitting greenhouse gases as soon as possible. On the current trajectories, the world is set to warm by around 2.5°C by 2100, and continue upwards thereafter.

To explore potential solutions to mitigate and adapt to climate change, scientists created scenarios that project socioeconomic global changes up to 2100, providing a consistent set of assumptions about societal, technical, economic, and even cultural developments. We can’t predict the future, but the scenarios allow us to explore the implications of different possible futures in the form of projections of what can happen, as well as the progression of our response strategies to limit climate impacts.

The new generation of socioeconomic scenarios in climate change research, known as Shared Socioeconomic Pathways (SSPs), offer narratives about the world’s future considering factors, such as population growth, economic activity, urbanisation, or consumption patterns. These factors determine the way we live, including how we use energy and land, which is the main source of human-induced greenhouse gas emissions that interfere with Earth’s climate. These narratives can then be translated into quantitative projections used in more detailed scenario analysis.

Five different narratives of the future

The SSPs comprise five different scenarios. Four of these scenarios explore the corner points of challenges to mitigation versus challenges to adaptation, with the one remaining scenario representing a middle of the road world.

The scenarios are consistent with a world of: 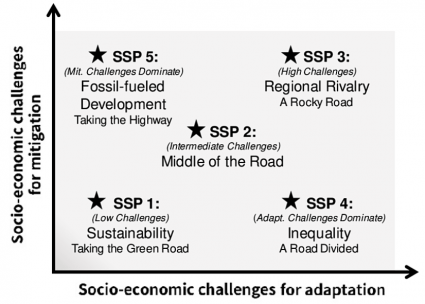 SSP1 and SSP5 project relatively optimistic trends for human development, but differ in that SSP5 assumes this will be driven by an energy-intensive, fossil fuel-based economy, while in SSP1 there is an increasing shift toward sustainable practices. SSP3 and SSP4 are more pessimistic in their future economic and social development. SSP2 represents an intermediate scenario where historical patterns of development are continued throughout the 21st century.

These scenarios are not unique. For example, there are different ways one could envisage a “sustainability” world (SSP1). They also contain contradictions. For example, a fossil-fuel intensive world (SSP5) can also reach aggressive climate targets, through excessive use of carbon capture and storage. However, these scenarios do offer a common starting point, which makes it much easier to compare scenario results across models.

Compared to the previous generation of scenarios (known as the Special Report on Emission Scenarios or SRES), the new SSPs offer a broader view of a “business as usual” world without future climate policy. Mitigation and adaptation are considered orthogonal to the underlying socioeconomic pathways, with researchers later combining the SSPs with various emission targets (policy) to examine barriers and opportunities for climate mitigation and adaptation in each possible future.

The SSPs have been used to help produce the Intergovernmental Panel on Climate Change (IPCC) Sixth Assessment Report on climate change, published in August 2021. The background literature consists of a combination of the SSPs with different models and warming levels (analogous to the previous Representative Concentration Pathways or RCPs). A selection of these scenarios are used in the IPCC Working Group I and II Reports for detailed projections of climate over the 21st century, and many of the SSP-based scenarios are assessed in the IPCC Working Group III report on mitigation.

This climate classroom is also available as a PDF.